SPECIAL BOOK GIVIN BY HAILE SELASSIE TO THE WORLD

In the University Mc Gill in Montreal we know that Haile Selassie I gave is revised Amharic Bible. So many treasure of books were given by is Majesty and the UnionJah University would like to discover them all.

The African Union (AU) has unveiled a statue of Ethiopia’s Emperor Haile Selassie I at its headquarters in Ethiopia’s capital city Addis Ababa. The emperor served as King of Ethiopia from 1930 to 1974. The statue was created in recognition of the role Haile Selassie played in the creation of the Organization of African Union (OAU) in 1963. He had a vision to free all African countries from colonialism and create strong and free independent countries on the continent. Speaking at the inauguration of the OAU, he said: “May this union last 1,000 years.” The OAU lasted for 39 years before it changed into the African Union in 2002. The AU continues Haile Selassie’s vision of achieving greater unity between African nations. 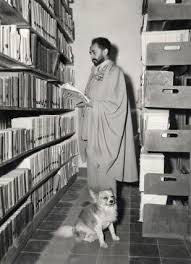